The animosity is hard to believe.  After all, who would hold a grudge against a turtle.  When wildlife rescuers told me that some people deliberately steer to hit turtles trying to cross the road, I didn’t believe them. Then they paid to put up a large sign across from the house during the season when turtles come up out of the marshes to lay their eggs, often crossing a road to do it.

The sign read, “Please don’t run over the turtles. May be species at risk,” all in big white and orange unmissable letters.  Turtle species are at risk because it is the females that get killed on the roads, throwing the male/female ratio into wild imbalance. As turtles do everything slowly, a female snapping turtle can be almost twenty before she gets around to laying some eggs.

So I returned from town one morning to discover some vandal, who must have thought it a great laugh, had pried off the firmly nailed down letters of the word “Don’t”. The sign now read “Please run over the turtles. May be species at risk.” They went to considerable trouble to pull off this prank for they had to stop in a country road, visible to all passing traffic and watchful eyes in houses nearby. 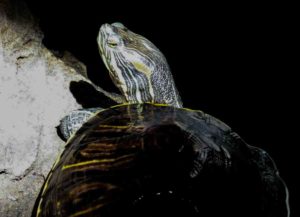 I can always used a helping hand so I don’t go extinct. Yeah, I’m talking to you.

No one caught the culprit.  The turtle expert sighed and told me this is just one more incident. He had, at his own expense, put up sturdy metal signs bolted to poles and found the bolts cut with bolt cutters just to destroy or steal the signs. He was surprised my sign lasted so long in one piece.

So the sign people have hauled the sign away again and the turtles are left to take their chances on the road without any protection.

Another petty triumph for human maliciousness?  Not if you stop and help a turtle out of danger anyway.